Why is Mistress Lilyan better than my girlfriend? PART 1

Why is Mistress Lilyan better than my girlfriend? 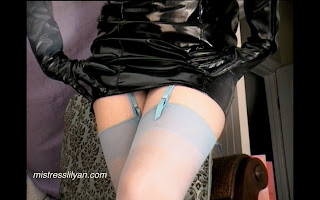 So I've completed part 1 of my session with goddess. As you can see from the pic, she wore the PVC outfit that drives me so utterly insane. She's set me a number of tasks today... one of which being this post. Goddess has chosen this topic and I have no doubt she's chosen it to brainwash me and lead me further down her path to moneyslavery, financial domination and becoming her loyal servant and paypig. I know I shouldn't do it but I want to please her so much. I must follow her orders and please her. Also, I won't be allowed to cum until I do all the tasks she has set so i have no choice... but i still want to do it regardless.

Goddess' requested topic, as you can see from the title, is 10 reasons why Mistress Lilyan is better than my girlfriend. So here they are, in no particular order.

I should point out that my gf has what many people (including myself) would describe as quite a nice body. She gets regularly hit on by other guys too. However her body pales in comparison to Goddess. As I've mentioned in an earlier post, Goddess has the most amazing legs, hair, eyes, lips, skin, ass, breasts/cleavage and feet. Everything about her physically is a whole new level for me. Now i find myself comparing everyone to her and as a result I'm quickly not finding anyone else arousing at all... including my girlfriend. I have no desire to see anyone else, it's Goddess who i crave. She is sexy and beautiful... and i'm not just putting those 2 words together lightly. She's sexy as her body and her curves and movements are intensely arousing. She's full of sexual energy. However she is also beautiful... her eyes and smile can contain such warmth and beauty and perfection. She's both beautiful and sexy which I think is quite rare.

It's not just her body though... it's how she uses it. Goddess will strike sexy poses and dress herself up in ways to highlight her beauty. My girlfriend isn't as comfortable with doing this... she will wear more conservative clothes and also has problems with letting me see her naked or in her underwear. We also need to have sex in the dark... I don't want to turn this post into negative criticisms of my girlfriend though... This is the person she is and I respect that and it suits her in her own way. However, when comparing her to Goddess, I have no choice but to admit that Goddess is superior.

I'm deeply attracted to power in a woman. Power, confidence, independence and the willingness to use it. Mistress Lilyan is the most powerful woman I've ever met and it shines through in everything she does. In her appearance, her actions, her words and her aura. The fact she's well aware of this power and welcomes the sense of confidence it brings her makes her all the more sexy.

My girlfriend is quite independent when compared to other Asian woman but she does have a lack of confidence. Considering how attracted I am to powerful woman, this is a definite issue.

I should also point out that despite the immense power Goddess has over me, i trust her completely. She would be able to do all sorts of things to me because of her power... she could ruin me in a matter of minutes at any moment if she wished to. However, I trust her with this power completely. I can't explain why... it just feels right. Is it because of her brainwashing? or her intelligence? or is it just that i'm in love? I don't know... but i don't need to know... I can just continue to trust her unconditionally. That's what Goddess wants and what I want as well.

Goddess is very very intelligent. I've mentioned this before... in the words she uses, her creativity and of course the way she can get inside a man's head. She possesses all the skills needed to excel in her role as Goddess and Mistress. However, I feel that her intelligence extends beyond this. She appears to be well read, well informed and very smart. I admire this in her quite a lot.

This is one area that my girlfriend isn't so strong in... it's an issue which i feel has had a negative effect on our relationship.

I adore Mistress Lilyan's dry wit. The way she can cut through the BS of her slaves with a single remark. She can put people in their place when needed and also use it to impose her dominance and superiority over her slaves. This makes her so entertaining to chat to and listen to. It makes me enjoy my time with her and want to spend more time with her. I also feel like her sense of humour goes well with mine too... we can bounce off each other well and have good conversation. If that's actually true or she just convinces me it is i'm not sure.

When i imagine being with her in real life (yes it's unrealistic but i can't help it!) I often fantasise about just chatting with her for hours on end. She's a fascinating person... her personality and wit.

I actually click quite well with my gf as well... we can chat together pretty well too... it's one of our strengths actually. But Goddess' sense of humour and wit places her well ahead of my GF in this category as well. Additionally, Goddess maintains a sense of mystery about her... she doesn't reveal everything about her which makes me crave to know more about her. I'm sure this is a tactic of hers and it's a very effective one!

Goddess has exquisite taste. Her taste in clothes, coffee mugs, jewelry, makeup and furniture are all exemplary. Despite not knowing much about her taste in art, music and other such areas, I'm certain her taste in these areas are great as well. You can tell this is the case because she also demands so much of herself and her slaves. She wants the best of everything and has the taste and the skills to get it.

This is one area I have issues with my girlfriend about. We don't share as much in common in taste than i feel i do with Goddess.