I might get into trouble for this but i must be honest. 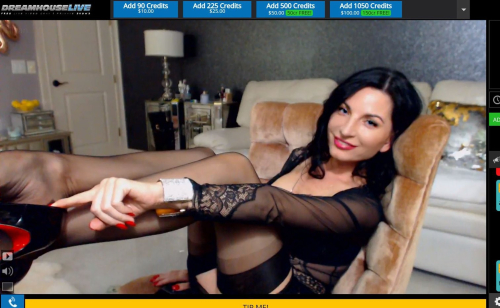 I first met Goddess Lilyan on DreamHouseLive.  For those of you who don't know, DHL automatically records private sessions as an archive that the member can re-watch as much as they like. Obviously, Goddess would not approve of me watching our session as much as i like so the rules are i'm supposed to send a small payment for each time i watch and (i think) ask for her permission before viewing the session again. I got money available for sessions today and I couldn't resist re-watching our first session together. I paid her as ordered but I haven't asked for her permission... I can't recall if this was a requirement or not... I think it wasn't but I probably should have checked first. Also, as i mentioned before, I'm supposed to be studying a masters degree at the moment and Goddess wants me to study hard for my career as it helps her finances... But here i am posting again and not studying. However, I'm just so overcome right now with excitement and anticipation and can't focus on study! Hopefully this post pleases her enough that she won't be too angry with me. First of all, here's a backstory on how we met: ************** I'd just recently joined DreamHouseLive. I'd been a member for a month and during my first day online i met a mistress who did a nice job of teasing me and taking all my tokens away. She then ordered me to wait 2 weeks then get more tokens and see her online so she could take more tokens. I'd done this sort of thing before but only lightly, so this was all pretty new and exciting for me. She was pretty sexy and wore some great stockings and teased me well. I was looking forward to our session and was eager to please her. However, when i got online she wasn't there yet. Frustrated, i decided to make the most of the situation and look around at some other DreamHouseLive rooms to chat a bit with other camgirls and tease myself a bit so i'd be more frustrated for my mistress. I went to the search function and typed in "goddess" and a small preview picture of what seemed like some really sexy legs came up from a room labelled "Lilyan" I thought she would be great to chat to for a bit while i waited for my mistress to come in so i innocently entered the room. As soon as i entered i started to get a hunch that i'd made a mistake. Goddess Lilyan was posing and chatting to her devotees and i immediately felt her power. However, she was modeling her feet at the time which, while very nice indeed, wasn't quite my kink. As you all know now i'm more of a leg guy. Knowing that requesting without a tip is rude I went to her profile and found that i could get her to pose her legs for 75 tokens. My mistress had ordered me to get 2000 tokens for her but i was credited 2100 tokens for some reason, so i had a few tokens to spare. What harm would one tip to another girl do? I could still give her the 2000 tokens. Plus, it will make me hornier for her so that's great! and this nice new Goddess Lilyan gets some tokens too. Everyone's a winner, right? So i tipped her the 75 tokens and requested leg modeling. She obliged and started talking to me in her sexy tone. I immediately knew i'd made a grave mistake. Her legs were spectacular as were her command over them. Not only was she better than my other mistress, she was in a whole new league. I had to leave. Quickly! But i couldn't leave... so i made another grave mistake. I confessed how i'm supposed to be loyal to another mistress and i needed her to either ban me from her room or stop posing so i could leave. Needless to say, this amused and encouraged her greatly. She assumed that i was a stray, weak-minded sub she could add to her stable of devotees... some fresh meat... she was right. Before i knew it i had tipped her several times... i now had about 1800 tokens, there was still a chance of escape... i could tell my other mistress that there was just some exchange rate issues which short changed me. This was my chance to leave. I tried as hard as i could... but as i was thinking this over i'd mentioned that i was considering going private with her... Why did i do that??? I don't know. I wasn't in control. Unsurprisingly, she was more than happy to go private with me... I hovered my mouse over the private button but then used all the strength i had to resist. I apologised to her, told her i need to be loyal to my mistress, and left. Goddess Lilyan smiled politely and bid me farewell. I'd won! I was impressed with my willpower and left the house to get some food. As i left, i couldn't get Goddess out of my mind. She had such great power... and her legs, while in pantyhose which isn't my preference as i prefer stockings, were incredible. However, when i returned home i peeked into her room as a unregistered guest and noticed she was wearing stockings! I gasped loudly and exited the room. Then i realised i couldn't win. She was too powerful. I logged in and confessed that i can't resist her. I requested and tipped for her to wear a dress and panties to tease me with (i LOVE upskirts) then went into her private room.

He is so lucky. Mistress Lilyan is a religion. Mine and everyones.