He is standing, his face in the corner when she enters. Lilyan can see only his back. A steel collar around his throat, a heavy chain leading down to steel cuffs pulling his wrists up behind him, steel shackles at his ankles... And bare skin. He does not turn as she approaches him from behind, her heels tapping against the floor. He can not. A short chain from his collar to the wall makes him stare into the corner like an errant boy. 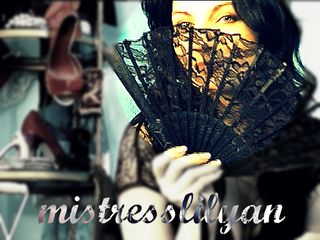 Lilyan comes up behind him and runs her hand over his bare bottom. Leaning in close to him, she puts the slender ebony cigarette holder to her lips and blows a puff of smoke over his shoulder. The smoke swirls in the corner and he coughs. Lilyan laughs gently and then sighs contentedly. She loves to see him like this. She loves that he is helpless. Loves that her power over him is limitless. She reaches up to run her fingers through his hair. He is hers. She seduced him and took his family. With them gone, his longing for her became even greater. He could deny her nothing and she took everything he owned. Then she took his dignity, leaving him like this: nude, chained, staring helplessly into the corner.

The keys to his bonds hang on a lanyard around his neck. They might as well be a million miles away. The fact that they are so close yet beyond his reach is another of Lilyan's small torments for him. It is almost over though. Lilyan has kept him in case she might need something. A signature to transfer a property or close an account. He has signed anything she brought to him. Without question, without hesitation. He was hers. She would free one hand and place the pen in his fingers. He would sign just like a good little boy. And then she would cuff him again. Sometimes she rewarded him with a kiss on the cheek. Sometimes not. Either way, he did whatever would please her. He belonged to Lilyan.

She did not need what he gave her, what she took from him. When they met she was famous, she was wealthy. His sacrifice of everything he had meant little to her in a material sense. Still, Lilyan found such pleasure in it, as always. Such pleasure in his defeat and in her victory. She loved knowing that he had denied her nothing. That in spite of everything, he still longed for her. Yes, he was Lilyan's.

Still, that would end soon. This one was not the first to take his place in the corner and he would not be the last. She has new prey. A new victim in her web. Soon, Lilyan would put him in the corner. This one would have to be removed. Lilyan had long since learned not to make pets of her prey. She will cast him aside without a moment's hesitation.

She leans in to whisper goodbye in his ear...  And then she leaves him.