What are poppers ? How to use poppers?

Many of you contact me asking what poppers are since they are mentioned in my twitter and slaves exposed quite often.

Ok lazy fuckers! I did the homework for you, here it is :

According to the wikipedia : 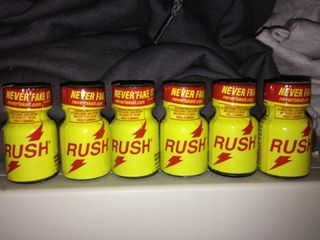 Poppers is a slang term given to the chemical class called alkyl nitrites that are inhaled for recreational purposes, especially an aphrodisiac. Today poppers are mainly sold in cap vials.

Inhaling nitrites relaxes smooth muscles throughout the body. Smooth muscle surrounds the body's blood vessels and when relaxed causes these vessels to dilate resulting in an immediate decrease in blood pressure.

Alkyl nitrites are often used as a club drug or to enhance a sexual experience.

To avoid overdose , make sure you use it under supervision of experineced Mistress and be open with her regarding your prior experience or lack of it. Its perfectly safe if you follow directions.

Do not  drink or spill on skin.

Please feel free to post comments and your own experience of adice on poppers brands you like best in comments.

Poppers have led my to so many things. Mistress Lilyan had used me for gay sex. Nothing really matters when I have poppers.

I love poppers, and Mistress Lilyan has been amazing in helping me use them and get the most out of the experience. I can no longer imagine my life without them. Mistress has turned me into a popper addict and soon to be cocksucker. She is wonderful!!! I practice sucking like a slut on my fake cock, poppers always close by. Sniffing poppers and inserting my butt plug is also one of my favorite fun activities. Let Mistress Lilyan and poppers change YOUR life!!

Poppers are such a rush, remarkable how a little sniff (or two or three) can turn you on. I want to be Mistress' obedient bitch while under the influence of these delightful nitrates :). If sissification, forced feminization or forced bi is something of interest to you then I would strongly recommend poppers... and Mistress Lilyan

Well, I've been sick for two weeks and have not been able to enjoy any popper time. But I'm on the mend and poppers will soon see a welcome return to my life. I love having Mistress Lilyan guide me through a popper sniffing session!! What a rush, the brief intensity of poppers coupled with the amazing Mistress!! I always want to please and amuse Her, but when I add poppers to the mix.... it's heaven for this sissy!!!

I do loooove poppers!!! So much fun, and such a craving for cock when high on them. Mistress has me play with my toys as I listen to her beautiful, hypnotic voice in private sessions. Such a glorious experience for this sissy. Give poppers a try, and combine them with Mistress Lilyan!!!!