I have been training scotte for many months now and I see huge progress. Here are his own words..

Why I should never get Married: 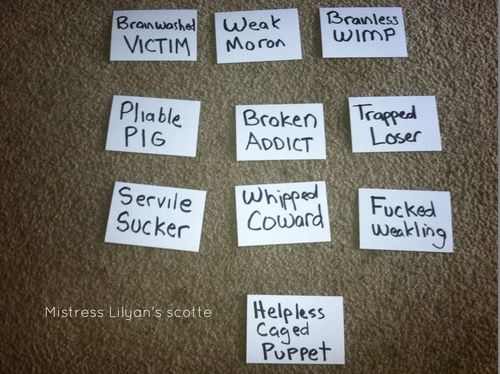 I am not a real man, I would feel uncomfortable trying to act like one all the time.  My wife and

others would see through it and know that something wasn’t right.  They might not understand

whats happening, but they would know I am not a real man. And look at me like I was some sort

the way I acted that I Was a submissive loser. Then she would want to get a divorce.

And it would be even worse if we had kids. Trying to raise a child would be a constant battle.

And on top of that, I would not know how to raise him as other than a submissive loser. He

would hate me for that and my wife would too. It would ruin two other people’s lives instead of

control me and turn me into a subhuman pig.

Its really the best option for everyone involved. No offspring to pollute the world with, no wife to

disappoint or disgrace. It’s a much better solution for everyone. And Miss Lilyan has a plan that

will make sure everyone is happy. I trust Miss Lilyan and will always obey her.