"Not that it matters, but… What do you think?” Lilyan asked.

“It’s beautiful! You’re going to look great in it. Cruising with the top down.” Ethan replied, enthusiastically.

Lilyan smiled, “Yes, I will, won’t I? Well, what are you waiting for then? Give the nice lady your American Express card.”

Ethan fumbled in his wallet and pulled out the credit card. This would max it out, of course. It would take years to pay it off. Even with the second job she had found for him in the evenings.

“I’ll just go run this and bring back the paperwork for him to sign. Let me find someone to take the plate off your other car and put it on this one.”

“He’ll take care of that. Make it snappy, boy.”

Ethan ran back to the beat up Honda he drove, Lilyan’s trade-in, dug around in the glove compartment and managed to find a screwdriver. He took Lilyan’s vanity plate, her initials, off and then ran back to put it on her new BMW. By the time he was done, the salesperson was back with the contract and credit card slip for him to sign. He signed everything, spending $58000 on a car he would never be allowed to drive.

The salesperson shook hands with Lilyan, ignored Ethan and walked back inside, counting the commission on the easiest sale she had ever made. Lilyan walked around her new car.

“And it’s fully loaded, of course… All the options.”

She pressed a button on the remote and the trunk popped open. Ethan looked inside and saw what she meant. A pair of handcuffs and shackles were bolted into the floor. Ethan looked at Lilyan nervously.

“As you can see, I thought of everything. Inside.”

Ethan hesitated for an instant, but a look from Lilyan was all it took to let him know that she meant business. He climbed into the small trunk and laid down. Lilyan locked the shackles around his ankles and handcuffed his wrists behind him.

“Let’s take a little ride,” she said, smiling. And then she slammed the lid closed. 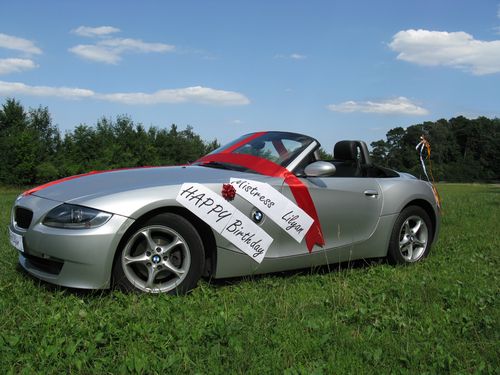